Detection of traces of hands.

Detection of traces of hands. The essence of the physical methods of detection of latent fingerprints to be guided by the use of some objective physical laws. For example, the properties of the substances included in the potozhirovyh precipitates retain particles other substances infiltrated into them without engaging them with chemicals and methods of the group include the phenomena of adhesion, for example, adhesion to another substance sledoobrazuyuschy substance.

Visual method. The physical methods include mainly optical methods based on amplification trace visibility, by using the most favorable conditions of illumination and observation, (it’s worth noting that there is another classification identifies a group of methods, such as “visual methods”, where, and include optical methods of detection hand traces).

The easiest way to detect traces of the hands at the scene is an optical method. This method allows you to save tracks and sledovosprinimayuschey surface in its original condition and should be used first.

By the methods of optical method include: Lighting and review of the surface at a certain angle, the angles may be equal or different. This is achieved by changing the position (small-sized object), moving the viewpoint or light source.

Volume fingerprints conveniently studied under the oblique incident light. To detect subtle traces potozhirovyh on the subject with a glossy surface of the object must be put into a position to the light source, the light shines at an angle and displayed in the direction of the eye (the level of illumination and observation angles). Bulky items are inspected using a portable lamp or a flashlight by sequentially moving it on the surface of the object. The room where the inspection is carried out, it is advisable to darken. Sometimes, in order to reveal the subtle traces of the object surface is moistened breath. At the same time the moisture from the surface of the object disappears faster than the scent, and allows us to observe it visually.

Detection of traces of hands. Overview of transparent objects in transmitted light: allows you to identify weak potozhirovye visible fingerprints. For contrast enhancement useful to have the subject so that it was a dark, uniform background, and if looks bulky object behind it placed a black screen. It also recommended to check in a darkened room, providing accent lighting looks object. If thus a transparent object not be able to detect traces of the hands, then work with this subject can be stopped: the tracks on it, most likely, no.

Apply different filters: it allows to identify fingerprints on objects surface color which is close to the next color. This improves the contrast of traces of papillary lines on the background. Selecting a particular light similar to the selection of filters filter used to enhance the contrast by color separation shooting. Painted low-contrast marks should be viewed in bright light at different angles relative to the surface of the object. 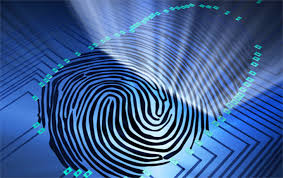